Anthony’s has a long history, starting as The Soup House in the 50s by Anthony and Antoinette Spino. Back then it was just a small area, what is now the parlor of today’s restaurant.

In 1978, after running a bar and a liquor store for a while, Anthony Spino, Jr. expanded the restaurant with his father and reopened it as Anthony’s in 1978.

“I think he just came back to his roots,” says Vito Spino, one of Anthony Jr.’s sons. “It was a little quieter. Wasn’t quite the bar scene. It was something a little more relaxed.”

Since its opening, not much has changed at Anthony’s. Most of the decorations and setup are the same as they were in 1978.

“My father’s never been a huge fan of change, so to get him to do anything is kind of rough,” Vito says. “There are new ceiling fans, new ceiling tiles. You know, the stuff you have to replace. But for the most part, the pictures on this wall have all been there since it opened. For the most part it looks pretty similar.”

Not only has Anthony’s itself not changed much throughout the years, but neither has its clientele. While Vito says they do get new faces all the time, there are customers who have been there since the very beginning.

“There’s a lot of customers who’ve been coming in for a long time,” says Vito. “There’s customers that I still see today from when I was bussing tables. Definitely loyal customers, long-time customers.”

Most importantly, Anthony’s has always been a family affair. 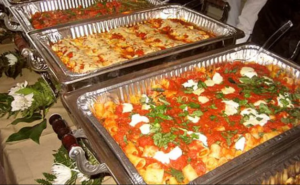 “It’s been family-run since the beginning,” Vito says. “My mother used to work in the kitchen. My father’s still here. He still comes in six days a week and opens up. Me and my brother grew up in the business, and now Michael who’s basically another brother. His father Bobby works here as well. And all the girls have been here for twenty-plus years. It’s just a family-run environment, and the customers have become kind of the same way. It’s like another house, another home.”

For Taste & Tour, Vito says you can expect them to mix it up a little bit while still looking at what people have enjoyed in the past.

Anthony’s is located at  701 Grand Blvd, Kansas City, MO 64106. For hours and contact info, visit their website at www.kcanthonysongrand.com.

To purchase tickets for International Taste & Tour 2017, visit our Eventbrite at the following link: https://www.eventbrite.com/e/international-taste-tour-2017-tickets-36167495954.

Tasty Topic Talk, NORTHEAST NEWS , READ ALL ABOUT IT !